Diary Down, Diary Software based on Markdown

I have been writing diary entries for the last year as part of my project and for other projects. It's a great way of not forgetting anything and I highly recommend it if nothing else other than to keep you sane on larger projects. I have been doing this in markdown, which is an amazing little language to write in that converts to html. 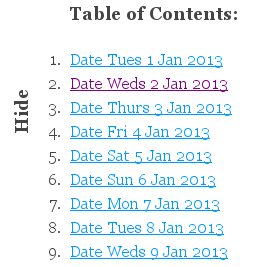 I had my diary in a git repo & scp'd the resulting html to a server every time I was finished writing so I could access the info anywhere. Eventually I wanted to index the entries so I wrote a little ruby script to generate a table of contents for me which worked great until I decided to over engineer the crap out of it now it's really awesome. In any case due to it's usefulness for me I decided to open source it so that it may be useful for others.

It requires:
markdown & ruby & a unix box (It probably won't work on windows)

Here's
An Example Diary
The Github for the project

The README on the github show's you how to use the diary. The git & scp stuff have been commented out but they are still in the code if anyone  wants to use the features. Play around with the example, re-size the windows, use the key board shortcuts & hopefully you'll see this can be useful for you too.