Translate the Ubuntu One KDE plugin 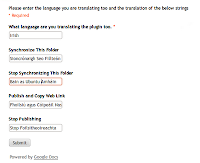 If you want the plugin in your native language fill out the form below and I'll upload a new release with your language included later in the week :)

EDIT: Well done lads that was a heroic response :)

Here is the code with multi language added and licensed under the MIT license. (That basically means you can do whatever you like with it)

Figured I should start releasing in something other than tar balls. So hope you like git hub your probably going to be seeing a lot more where that came from.


We now have have:
You should all be proud of your selfs.

Also here's the tar ball for every who like that method as well.

Note; I won't be uploading the tar ball as much because of git hub so if your language isn't included check github.
Posted by ShaneQful at 19:02